My 12-year-old son Joey was asked out by a girl a few weeks ago. My 14-year-old daughter Andi was home sick that day. The girl, we’ll call her T, must have told her older sister of her plans because she texted Andi by noon telling her their younger siblings were dating. I knew by 12:30. Joey called me after school to check in. I asked if he had anything else to tell me. “HOW ON EARTH DO YOU ALREADY KNOW, ” he responded. I said “because moms know everything.”

Really, today’s technology is what allowed me to know so quickly. I even knew the details. She had her friend give him a note that said “will you go out with me?” He verbally told her yes.

I didn’t know how to feel or what to think of all this. A girlfriend at age 12?? I figure they will chat at school and maybe hang out together at the school dance.

But for the first time ever, Joey asked to go see a play… the middle school play because T was in it. He sent her a candy gram. I thought it was sweet but the mother hen in me was a little nervous. 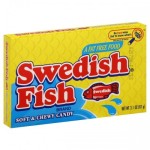 And then Valentine’s Day arrives… He knew he had to get her something but was smart enough to not go overboard. Well really he couldn’t because I would have never given him money or even allowed him to spend much of his own. He was actually quite clever. He made her a card that said Will You OfFISHally Be Mine? on the outside and Happy Valentine’s Day on the inside. A box of Sweedish Fish candy was attached. I might have to keep an eye on that Casanova.

How do you handle young romances?