There was nothing traditional about mine and Nick’s courtship so I knew I wouldn’t want a traditional wedding when the time came. We met at a costume dance. He was a zombie and I was Taylor Swift. He had blood all over him and bites out of his flesh. I had an ugly wig and pajamas on. He moved in with us after only five months. I hadn’t lived with anyone else since my divorce 10 years ago but I just knew it was right. He has three children ages 22, 19 and 18. I have two children ages 15 and 12.

We had talked about getting engaged and what type of ring I wanted quite a bit. My brother and sister-in-law make and sell jewelry (Bridewell Art) so we discussed ideas with them. I decided I wanted a non-traditional stone in the center so my brother custom made an aqua marine stone, the birthstone for March. That is Nick’s birthstone and the month Nick and I met.  It makes the ring even more special. He proposed on March 3, 2014, our one year anniversary date.

Nick’s daughter was leaving for the Coast Guard boot camp just a few days after we were engaged. We were told she would have five days leave before she headed to her assignment. Nick’s son Joel would be leaving for the National Guard in late July. So we decided we would get married during Jordan’s leave on Sunday, May 4, 2014 so all the kids could be at the wedding.  That meant I had eight weeks to plan a wedding.

We  decided it would be just immediate family and a couple very close friends in Nick’s parents’ backyard.  We wanted a very fun and laid back atmosphere. We started creating this atmosphere by picking a fun theme – superheroes.

I asked Andi and Jordan, our two daughters, to be my maids of honor. I told the girls to pick dresses that fit their style and that they would wear again. I wasn’t worried about matching. I didn’t want a traditional wedding gown so after trying on about 50 dresses, I found one that but made me smile with no ifs or buts. I found this awesome vendor on Etsy who custom made my shoes for only $35, including shipping. I didn’t tell anyone about the shoes since I wanted it to be a surprise, even for Nick.

The guys went even more casual. Nick and our three best men – our sons Josh, Joel and Joey – went with khaki pants and button down shirts.

The groom and the best men (Josh, Joey, Joel)

To stick with the theme, I had to throw a few surprises into the wardrobe and get a few awesome photos. I bought each of the guys their favorite superhero T-shirt, Jordan a Wonder Woman bracelet and Andi Cat Woman ears. This made for a fun photo shoot. 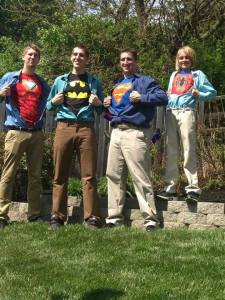 My brother and sister-in-law, with Bridewell Art, made Andi and Jordan’s jewelry for the wedding. It is gorgeous and meant a lot more to us than a piece from a store.

Two days before the wedding, my mother gave me a beautiful necklace that my father had given her when I was born. I wore that as my something old. My best friend Jessica let me borrow a silver bracelet. My dress was new and my engagement ring was my something blue.

Since we weren’t having friends in the wedding party, we decided to ask my best friend, who Nick is also good friends with, to oversee the wedding. Jessica was able to get certified online for only $32. This made the ceremony so much more personal.

We had very simple bouquets made from Fort Thomas Florist, a local florist. She wrapped them in Superman ribbon that I purchased from SweetRibbonAddiction on etsy. 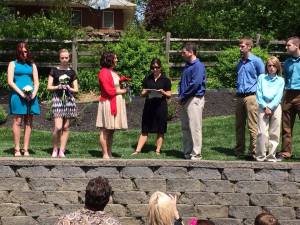 Writing our own vows also made the ceremony much more personal and sweet. Nick is an amazing poet (read his poetry here), which was shown in his vows. I promised to inspire him, love him and to never disrespect the Beatles. Anyone who knows Nick, knows that the Beatles part is very important.

Reading Our Own Vows

Jessica also helped us with a very special part of the ceremony. We wanted to symbolize the unification of our two families in a special way. Nick and I purchased a small birch tree, which symbolizes new beginnings, and placed it on the table during the ceremony. We had little ornaments made with our names and our children’s names. On one branch hung the ornaments for Nick, Josh, Jordan and Joel. On another branch hung ornaments for me, Andi and Joey. After we recited the vowels Nick and I wrote, we recognized our blended family. Each one of us removed our ornaments from the separate branches and then hung them all on one branch together showing the start of our new family tree. We are planting the tree in our backyard and watch our family grow. Our Family Merging to One Branch of the Tree

Nick’s nephew Nicholas passed away last August at 30-years-old. After his death, the family started something called Pennies for Pickle based on Nicholas’ nickname Pickle and the thought that our loved ones who have passed leave pennies in our path to say hello. We had the florist fill a vase with pennies and red Gerber Daisies, which is one of my favorite flowers.

Penny Vase to Remember a Loved One

Instead of having a guest sign in book, we decided to ask people to sign the corks from the wine bottles and then save the corks in a wine cork cage. This is something that will always be on display and not packed away in the basement.

Guests Signing Wine Corks Instead of a Guest Book

Nick and I wanted to keep it simple and fun so we opted for a wine and dessert reception. My new brother-in-law Eric made magnificent cheesecake and we had cupcakes and cookies from Affordable Wedding Creations in Covington, Kentucky. We did carry the superhero theme over into the cupcakes. 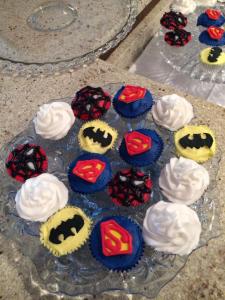 It was the perfect wedding for us. We were able to show our personality without overdoing the superhero theme. We made it personal by having the wedding and reception in Nick’s parents backyard with a small guest list and getting married by my best friend. We were able to recognize a loved one we lost over the last year and find the perfect way to recognize our blended family. We weren’t stressed over the expenses or logistics. It was the fun, laid back setting with lots of personal touches that we asked for.

The Groom and Daughter

Friends with the Bride 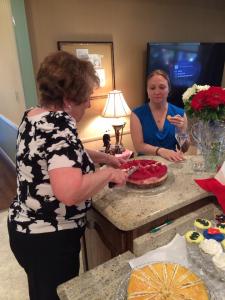 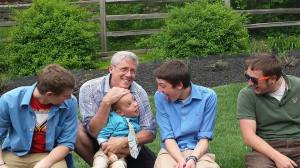 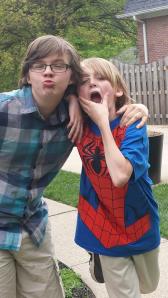 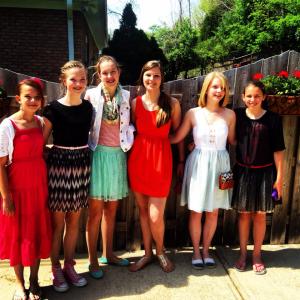