My husband Nick and I just had this discussion. Should someone who supplies another person with heroin who overdoses be charged and face prison time?

We lost Nicholas, our nephew, in August of 2013 to heroin (Read Nicholas’ story 72 Hours of Heroin here). He had been struggling with his addiction but had been clean for a few months. One night the temptation was too strong and he used, with the result being the end of his life. Nick and I weren’t married yet but living together so technically, Nicholas wasn’t my nephew yet but I truly enjoyed having him in my life. His death stunned us.

As we sat at the hospital praying and hoping he’d magically wake up, I went through his phone. The journalist and curious person in me had to know what happened. He was doing so good. He was staying clean. I had to know why. I had to know a timeline and I had to know who sold it to him. I was so angry with the person who sold it to him. I wanted that person to pay. I was able to piece together a timeline and figure out what had Nicholas so down that day. I was also able to figure out who sold the heroin to him… sort of. I had a name, but obviously a nickname. I also had a phone number. The deal had gone down via text message. We turned the phone into the police but for whatever reasons, the case went cold and they weren’t able to make an arrest.

I was angry. This guy killed our nephew. He gave him an illegal drug that is known to cause death A LOT.

I read yesterday that a dealer admitted to supplying a fatal dose of heroin to a Northern Kentucky man and is now facing 20 years to life in prison (Read Story Here). I know I would have jumped up and down for joy had this been Nicholas’ dealer. But when I first read the article, I had a battle between my head and my heart. If I owned a gun store, legally sold you a gun and you went home and shot yourself, I wouldn’t be charged nor should I. If I sold you a car and you chose to drive it off a bridge and died, I wouldn’t be charged. If I sold you cigarettes for 20 years and you died from lung cancer, I wouldn’t be charged.  If I legally sold you beer, you chose to drive, wrecked and killed someone else, I wouldn’t be charged. So why should the heroin dealer? In my heart, I immediately knew I wanted the dealer charged. But my head kept asking questions and comparing it to gun, car and beer salesman.

I told my husband that my head and my heart were having a battle. Although I think he was surprised at first, given all we have been through in the last year, but was also understanding. He said it wasn’t a struggle for him though. Nick said the difference is none of the other acts are illegal. As long as you follow the laws set in place, it’s not illegal to sell a car, a gun, cigarettes or alcohol. It’s illegal to sell heroin. Everyone knows that heroin can, and most likely will eventually, kill.  I am not denying that the user made a choice, a deadly choice but the dealer holds some responsibility as well. The dealer may not have held a gun to the user’s head or pushed the needle into their arm but the dealer provided the user with the deadly drug.

I want to know… what are your thoughts on the subject? Please be respectful of each others’ opinions.

Joey, 12, was suffering from unexplained pain again for the last month… Joey was diagnosed with Langerhans Cell Histiocytosis when he was 10-years-old. The cancer-like disease ate his hip bone away causing him to need a bone graft. Although no one was sure if he’d walk normally again, he can run, play and ride a bike like any other kid… most of the time. But then there are times that he is in such severe pain that he can only get around on crutches or in a wheelchair for weeks or even months at a time. Unfortunately it’s just a horrible side effect of this horrible disease.

So in early May the unexplained pain started again in his left leg. It eventually got so bad that he was on crutches again, missing school and using the wheelchair quite a bit. Joey became frustrated and borderline depressed. He was missing out on end of the school year fun, couldn’t ride his bike with his buddies or go do anything fun. His oncologist at Cincinnati Children’s Hospital Medical Center ordered test after test to make sure the Histio was not attacking again. Once that was ruled out Joey was able to start physical therapy again. He couldn’t even put pressure on his left foot at the evaluation that Friday. The therapist gave him a few exercises he did over the weekend.

The following Monday he headed to day camp at Circus Mojo in Ludlow, Ky. We knew about Circus Mojo because Paul, the owner, and Sharon, an employee, would often perform in the waiting room of orthopedics at Children’s Hospital when we were there. Joey enjoyed them so much that he had me schedule his appointments around their performance times. Joey and his buddy August headed to camp with Joey’s crutches and wheelchair in tow.

The Circus Mojo staff was awesome about accommodating our special situation. I spoke to Ginny in advance to make sure all would be okay. Paul and his crew made Joey take things slow and didn’t push him to do things that might be hard on his leg. He had physical therapy immediately after camp that day. He couldn’t stop talking about how fun camp was and he was able to get around a little better. The second day of camp came and he was able to do a little more. On the third day he could do even more but there was still one act he wanted to do but Paul told him was too dangerous if he still needed to use crutches. He had PT that afternoon and told his therapist he had to get stronger so he could do everything at camp. On Thursday he arrived at camp with one crutch and barely used it. He was able to do the act.

I drove the boys to camp on Friday. They were both so excited because they were going to learn even more that day and then perform for the families in the afternoon. I showed up for the afternoon performance and could see how excited all the kids were. 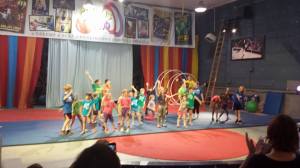 Joey actually climbed the silks and did what’s called the reverse diaper drop. He was able to walk on a wheel, balance all kinds of things, juggle scarves and so much more. It was awesome! I couldn’t believe this was the same kid who could barely walk at all a week ago. He couldn’t stop smiling.

I truly believe that camp at Circus Mojo camp played part in Joey’s physical therapy. It gave him a challenge and a goal. He wanted to be able to participate everything. In order to do that he had to do his PT exercises and push himself. It also helped him emotionally and mentally. It gave him something to look forward to everyday. He was excited about learning new acts and seeing his new friends. Camp provided an incentive for him to push himself and get better.

The really awesome part was by Friday… he didn’t need the crutches or wheelchair at all anymore so Joey and Paul found another use for them. 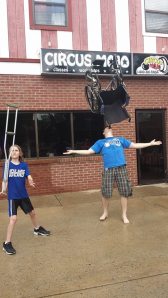 I’m sitting in a very small room right now with my son at Cincinnati Children’s Medical Hospital. It’s basically a large closet with a hospital bed, a shelf, a computer, monitor and owl stickers on the walls. Joey is lying in the hospital bed waiting for his Pet Scan. He’s been given pain medicine and other meds necessary for the scan. He looks so relaxed and peaceful as he watches Frozen on the portable DVD player. His eyes are barely open.

He’s not been this peaceful or pain-free in weeks. It brings tears to my eyes to see him like this, to see him at peace.

We are waiting for his Pet Scan. He has to have medicine in him for 45 minutes before the scan can begin. They will scan his entire body hoping not to find any new tumors. Hoping the Histio has not returned. He has pain in his left leg, hip and ankle. It could be that the Histio is eating his bones away again or that he is having another episode of unexplained pain. Although unexplained pain is frustrating, we are hoping for that. If that’s the case we will probably start physical therapy again.

If it is Histio…. we will kick it’s butt!