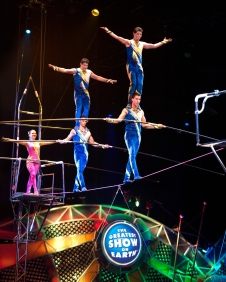 Ringling Bros. and Barnum & Bailey®    Circus is coming to Cincinnati March 12-16 and we have four tickets for opening night to give to one awesome reader. Built To Amaze!℠, the 143rd edition of the Greatest Show On Earth is sure to surprise audiences with over the top feats of strength, agility and courage. As the momentum builds so does the anticipation, anything can happen when Ringling Bros. Presents Built To Amaze!

I took my children last year. We had so much fun watching the clowns, the motorcycles, the tight rope walkers and so much more. My son even found a food vendor where he was able to have a kids meal with a drink for only $4.75. We hope to find that again!

From the blueprints to the band, the crates to the clowns, the hammer to the high wire, witness the spectacle as we measure out the perfect mix of marvel and majesty in an imagination equation where the impossible comes to life. Ringling Bros. and Barnum & Bailey®Presents Built To Amaze!

Tickets can be bought online or at the U.S. Bank Arena Box Office. They cost between $12 and $85. You can also buy a Family four-pack for $99, which includes four tickets, popcorn, marshmallow pops and lemonades. That’s quite the deal!

Raising2tweens has a four-pack of tickets for opening night (March 12) to give away to one lucky reader. You have up to four chances to win. Only one is required but the more you enter, the more chances you have to win.

1. Comment here saying why you want to win. (Required)

Enter to win by noon on Sunday, Feb. 23, 2014. Be sure to comment separately for each entry. The winner will be notified via email and announced on the Raising2tweens Facebook page.

Disclaimer: My family was given four tickets to the circus from Feld Entertainment.

Want more chances to win? Head over to my friend Krissy’s Blog, All In A Day’s Work or Amy’s blog In a Galaxy.