Most people never get to meet their hero. I was lucky enough to give birth to mine. My 11-year-old son Joey is an amazing young man. His white blood cells attacked and ate his hip bone away causing him to need a bone graft when he was only 10-years-old. He spent months in a wheel chair, then a year of physical therapy and in and out of Children’s Medical Center for a year. Eighteen months after diagnosis, he is training for a 6 mile hike to raise awareness and money for research for Langerhans Cell Histiocytosis.

Histio Hike Ohio takes place Sept. 27-29 at Shawnee Park in Ohio. Team Super Joey is made up of nine friends and family members. We are all looking forward to meeting other families who deal with LCH. It is only diagnosed in about five in a million so we don’t get to meet many other families who are dealing with Histio. 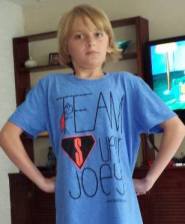 The other night I was tucking Joey in. He was wearing his Team Super Joey T-shirt. I’m not sure how we got on this topic but he said to me “mom, I’m not normal. I’m wearing this shirt because I’m not normal.” It broke my heart to hear that. I told him that no one is really “normal.” Everyone has something unique about him. I reminded him that he has beat this disease so far (it can strike again at any time) and that his courage can help other kids. He decided to do this hike to help other children. To make them realize that they can fight Histio with the right doctors, determination, and courage. I reminded him how he will be meeting others with his disease later this month. He smiled. He remembered that so far he has been one of the lucky ones. Others have lost their lives to this disease but Joey has been lucky enough to only lose a hip bone.

He then told me how he couldn’t wait to go to the hike and meet other kids, and adults, who understand what he has been through. He wants to tell other children they can get through this too. Joey wants to reach out to children at Children’s Hospital who have been diagnosed with Histio. He knows he was lucky enough to live near Cincinnati Children’s (one of the few hospitals that specializes in Histio) and to have his support system so close so he wants to give support to others who aren’t as lucky as him. He truly is an amazing kid.

I’ve had other heroes in my life… There have been historical figures, athletes, actors, activists and others who I never met. Honestly, I never thought I’d meet any of my heroes. But now, I’ve been lucky enough to give birth to my hero. My son’s courage is amazing. He builds me up and gives me strength everyday.

I am asking you to show my hero your support by donating any amount in Joey’s name to the hike and help us find a cure for this cancer-like disease. You can also help spread the word about Histio by sharing the picture below and this post via email and Facebook since September is Histio Awareness Month.