My 11-year-old son Joey is very smart and super creative. His brain works in a very unique way, which is a part of the reason he does so well with Odyssey of the Mind. He has been doing science projects at home on his own since he was about 3. He has a crazy imagination and can keep himself busy 100 percent of the time. He use to collect garbage at his sister’s soccer games and then build machines from it. He often gathers random materials from around the house and builds things in the yard with his friends. He is a creative genius. 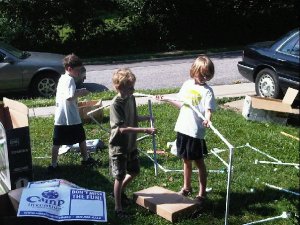 A normal day at our house

Although he loves to build and experiment, Joey will do the bare minimum when it comes to school projects. He will not do extra credit because it’s “extra” unless I make him. If a teacher says something is optional, he will only do what’s required. If he scores a good grade on his math test, he will not do any of the corrections to make it better unless I force him. He gets mad when I require he do the extra. So we just had his first science fair at school. I knew Joey would do well with the actual experiment and data. He worked on it for weeks and typed his report well in advance. Our home printer is down so he sent his report to me at work. I printed it out and gave it to him in the car one day last week. “Now you are responsible for this Joey.” Later that day I put the dog in the car and realize she’s walking all over it with her sharp nails. I hand it to Joey again, “you should probably put this in your backpack so it’s safe.” The next morning I notice it is sitting on the kitchen table with the reminisce of breakfast, including syrup, all around it. I put it in his backpack myself. Since I knew Joey had been working on this project quite a bit, I made the mistake of assuming it was finished.

We came home from family night dinner at my mom’s Monday night around 7:30 when Joey announced he had to finish his project that was due the next day. WHAT? It is not finished??? At this point, he realizes that he didn’t send me all the pages to print so here we are with no printer and a missing page the night before. Luckily we have very sweet neighbors who allowed him to print there. I remembered that Joey had told me he wanted to take pictures of his project for his display board but he never gave me anything to have printed. I asked him if I needed to make an emergency run to Walgreen’s and he said no because he never took the pictures. I repeatedly asked if he was giving the project 110 percent and he assured me he was. I kept thinking his display board looked awfully plain. There was even a muddy shoe print on it. I asked how he was going to cover it… He cut out strip of paper and glued it over it. Then parents starting posting pictures of their kids projects on Facebook and I knew Joey didn’t care about giving even 100 percent.  Look at his friend’s board below and look at Joey’s. I’m not sure he even used scissors to cut the information out that he glued on. I’m guessing he just tore it with his hand. He must have realized when he got to school that he forgot to put a title on it because I noticed at the fair Tuesday night that he had scribbled the title on the board in pencil in his absolute worse handwriting. 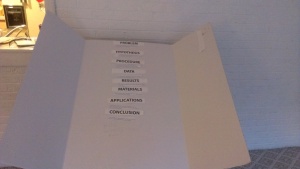 Joey’s board was the most plain board at the entire fair. It was the only board that did not have a photo, color or something on the side panels. I know other parents and his teacher had to be thinking “WHAT THE HECK? This is an incredibly creative kid who is on the chess team and goes to state every year with Odyssey and this is his project.” On our walk home I asked if he thought he did the best he could. He told me he did. I asked again. He then admitted that although his data was fantastic (and it was) that he could have put more in to the presentation. We talked about how when someone is viewing projects they are more likely to stop at something visually appealing than something plain and he agreed. I understand I could have pushed him harder to make it better but I feel like we are at the point that I have to let him figure it out himself.

Hopefully he won’t be a minimalist on future projects and will put that creativity to work!