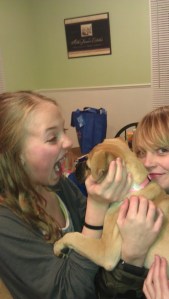 Remember how I told you when I first started writing this blog that if it can happen… it will happen to my kids?

As you know, we have a puppy. She has become a very important part of our family. We actually have become one of those crazy families who talks to their pet all the time, cuddles with her and talks about her to their friends and co-workers. We have become the family I used to laugh at and not understand at all.

Scout has a nipping problem though. Usually it’s just puppy bites but sometimes she breaks the skin and causes blood. NEVER wear fluffy slippers or it is guaranteed that she will attack your feet and not let go. She has gotten too excited a few times and gone for the face. In fact, she has bitten me in the chin twice and made me bleed. My son hasn’t been able to enjoy her as much as he had hope because she really likes to nip at him. I honestly think this is because he is so timid with her. It takes him every bit of 5 minutes to get her leash on her. Anyway, I knew this was an issue so I had signed up us for “Puppy Kindergarten.” Every time she nipped at one of the kids I would remind that we were going to learn to train her. Classes started this past Saturday and I’m hopeful.

However, before we could get to training, the craziest thing happened. I’m driving home from work on Thursday – I have a few stops to make so I’m running late – when the kids call me for probably the fifth time in 40 minutes. I’m irritated at this point so I answer the phone “what?” I hear J’s panicked voice. “The dog jumped up and pulled A’s braces off.” I respond with “WHAT?” He says it again but I’m thinking there is no way I understand him correctly. I repeat what he said and he confirms. My response “Did she put her head in Scout’s mouth?” He screams no.  A gets on the phone crying and tells me the same thing. I ask her if she put her head in the dog’s mouth and she responds with “NO!”

I can’t even imagine how this could possibly happen and I’m so frustrated at this point by the amount of whiny and ridiculous phone calls that I have received in this short period of time that I can’t say I was the best mom I could be at this point but I think it turned out well in the end. I insisted that she call the orthodontist herself since I was driving and couldn’t look up the number. My incredibly shy 12-1/2-year-old called the orthodontist, which was closed. She then called the emergency line and explained what happened. They told her how to clip the bar with nail clippers so that it was no longer cutting her. She did this herself before I even got home. I called the next day and made her an appointment to get it fixed. The braces had only been on three days when this happened!

Once I was home I investigated the situation. The kids said A was playing on the couch with Scout who got a little too excited, and got her tiny point teeth caught on the bar at just the right time. It still sounds crazy to me. And I know it sounded crazy to all of the techs at the orthodontist office today when she got it fixed.

You might also remember me telling you when I started this blog…. That wine is my friend. Tonight, after a brisk walk with a neighbor, I will enjoy a glass of wine. If it can happen… it will. What is the craziest thing your kids have done or that has happened to your kids?