Get me outta here!
I volunteered to go to A’s Speech and Drama competition on Saturday. Twelve sixth, seventh and eighth graders – 10 girls, 2 boys. Oh the drama! We loaded the bus at 6 a.m. I thought they would be exhausted or nervous so they would be quiet and calm. NO! That was not the case. They were loud, excited and goofy as can be. The assistant coach and I were the only adults on the bus.  I just closed my eyes and stayed awake enough to ensure no nonsense was going on. The 1-1/2 hour ride there honestly wasn’t that bad.

Speech and Drama is a girl heavy activity so although there were hundreds of kids, there were only about 20 boys. Those boys managed to make their way around to all the girls. One boy, who was maybe 13, was seen early in the day walking down the hall holding a girl’s hand. By lunch, this boy with his flat billed ball cap on sideways and his pants hanging way too low, was hitting on two of my daughter’s teammates. And of course…. The girls were flattered. I was constantly reminding them we weren’t there to meet boys from other schools but rather to compete. I was constantly calling for the girls to come with our team and leave the boy behind.

The boys weren’t the only ones being a little forward. A girl from another school made a point to give her number to one of our two male competitors – N. This made the bus ride home more drama than I could handle.

We loaded the bus around 6 p.m. to head home. “Where is S?,” which seemed to be the question of the day. The sixth grader was mingling with the “gangster” boy again!

The girl from the competition immediately starting texting N. She even asked him out. He told her he had a girlfriend and she asked to see a picture. He was going to take a picture of one of the girls on our team and text it to her. I quickly yelled “You cannot email, text or do anything to send a picture of one of our girls to a stranger!” All of the girls were helping him come up with what to say to her. The messages got ugly quick and I had to remind them that they would see this girl and all of her teammates again at the next competition. They then apologized to her for previous messages.

The boy with the ball cap was texting one of our girls. She seemed very irritated and wasn’t as vocal about the messages. I encouraged everyone to stop texting people they don’t really know.

In the meantime, the other male on the team was discussing his life-long plans, including his business plan, with me. I was in shock. This seventh grader was talking about things I didn’t even understand and was giving me advice on my own career. This extremely intelligent kid has already scored a 22 on the ACT. I am sure he will be a future Steve Jobs or Bill Gates.

Unfortunately, our conversation kept getting interrupted as I told the other kids their conversations were inappropriate, that they couldn’t send pictures to random strangers or make up rumors about teachers dating. Honestly, these kids were just having fun and completely joking but it’s amazing the things they do without thinking. Once I pointed out why it wasn’t appropriate they seemed to understand and respect that.

I will say this…. You will never catch me on the bus to a tournament again! I’ll drive separate next time and leave the monitoring to the coaches. J

How do you think your kids behave when adult supervision is limited? Do you worry about what they might do with their cell phones or as a group? 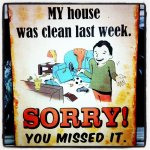 Princess A, this was not Halloween but just a normal day at my house

This Diva doesn’t get dirty

As I told you last week, we recently moved into our very own home. Both of my children are very happy here. I’m a single mom so I truly count on the help of my children in order to keep up with the house. This is a discussion we even had before I started hunting for a home. I told them both they would have more chores and they willingly agreed to pitch in.

My son has taken on the extra responsibilities that come with a house with open arms. He rakes leaves, takes out the trash, sweeps the deck and helps in any way I ask. Shoot, I usually don’t even have to ask. Unfortunately my 12-year-old daughter hasn’t kept up her end of the deal. In fact, I can’t even motivate her to completely unpack or keep her room clean. She’s supposed to load and unload the dishwasher each day but even that is a fight. Based on her reaction, you would think that I just asked her to jump in a pit with venomous snakes when really I only asked her to sweep the kitchen or dust her room. Don’t get me wrong, A will help sometimes without complaining  – if it’s something she enjoys doing like making homemade ravioli with the family or watching her baby cousin. And J does complain from time to time, especially if it’s something he doesn’t like, but is usually willing to pitch in without much of a fight.

I do not give an allowance but I do pay for both of their cell phones monthly, in addition to providing a warm place to live, clothes and food.

How do you get your children to pitch in around the house without a fight? Do you pay an allowance or offer some other type of incentive? What do you expect of your kids and at what age? I appreciate your advice.